Error: Twitter did not respond. Please wait a few minutes and refresh this page.

We are now well into the second half of the three year landscape restoration project and what a transformation we’ve seen already? Even though there is still a lot of physical project work to be done, our attention is turning more towards future financial sustainability and next steps. We are greatly encouraged by the regular positive feedback we receive, and our visitor survey just before Christmas shows that we are going in the right direction. We’ve teamed up with the Groundwork Trust to gauge opinion and support on our next steps.

There’s no doubt that, as an independent local charity, to achieve our ambitious vision requires courage, determination, optimism and a great deal of effort! We are already getting the feeling that this is more of a community ‘movement’ than just another project – ‘people power’ in action for a cause worth fighting for!  Above all we ask people and organisations who value Valley Woods, as a growing number already do, to lend us your support – we do not receive any public subsidy. We are very grateful for the support and confidence shown to us by our current funders and we look forward to building on that. We’re building up more support through membership and volunteering – our membership has increased by over 20% since September last year, and we’re developing a fundraising plan to sustain us in the future – so if you love Valley Woods – come and join in and be part of the adventure! Here is a summary of what has been happening since Christmas:

To conquer the wet weather, our woodland volunteers have helped us to put up a temporary gazebo to partially cover the Visitor Centre terrace area. It makes it much more pleasant to sit out after a walk in the woods in any weather. Thank you to all who helped to erect it and fix it in place. 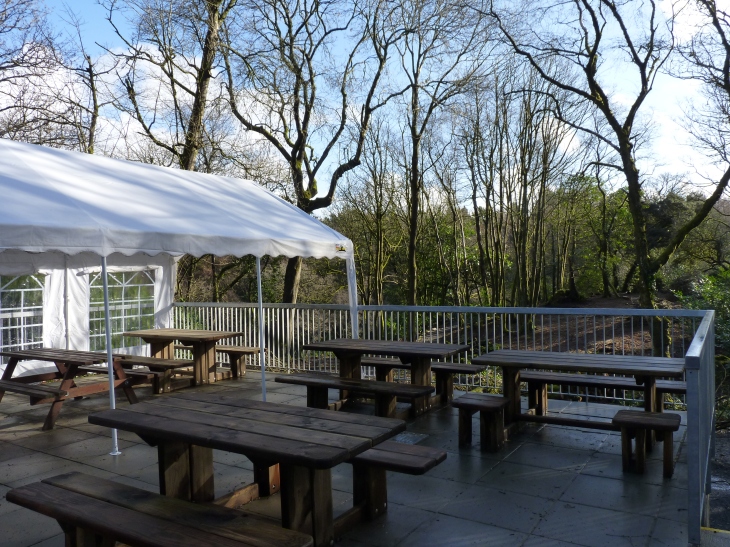 Did you know? We have free treats and water available for our hungry and thirsty canine friends in our coffee shop after long walks in the woods! 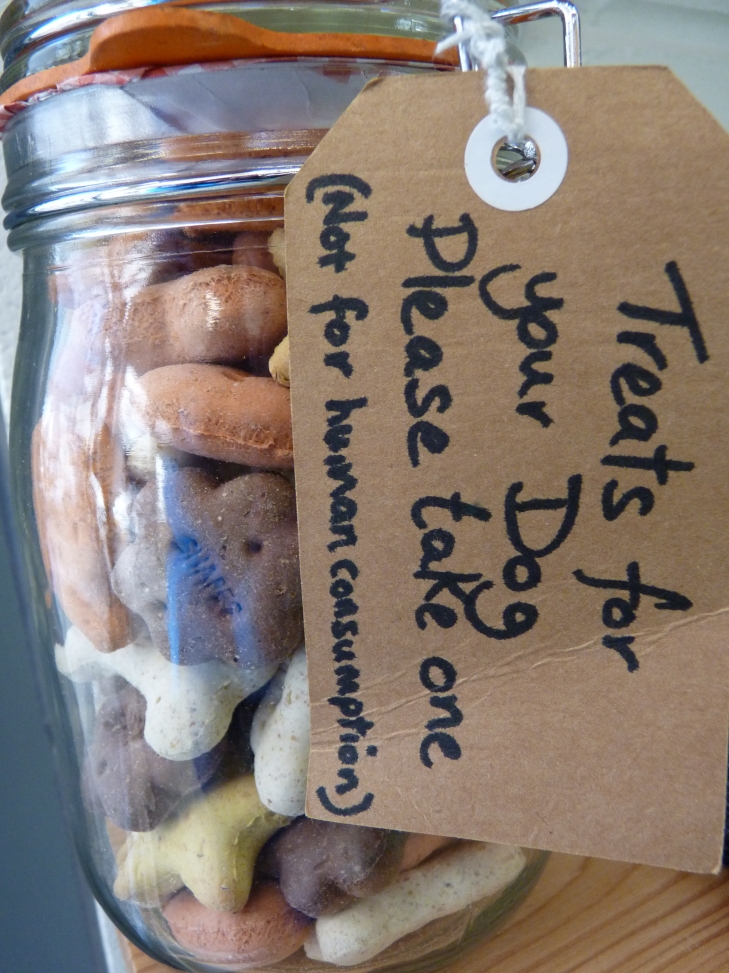 Free Treats in the Coffee Shop

Our coffee shop opening hours have changed slightly to 11am – 3pm for the quieter (and wetter!) month of February. Despite the shorter hours, we are more determined than ever to develop our current team of 35 volunteers who help us keep it open 7 days per week and to recruit even more people so that we can extend our opening hours in the Spring and Summer and secure its future as a successful and sustainable community-run hub. If you know of anyone who is interested in volunteering with us, do ask them to get in touch. The car park will remain open from 8am – 6pm as usual for the timebeing.

Its not too late to donate a rhododendron, azalea, wild daffodils or snowdrops to be planted at Penllergare Valley Woods, via our online store: http://penllergare.tictail.com/. Thank you so much to those who have already donated – the first wild daffodils and snowdrops have been planted by our woodland volunteers in the car park and upper terraces before Christmas and are starting to grow. Let’s hope Spring will be here soon! 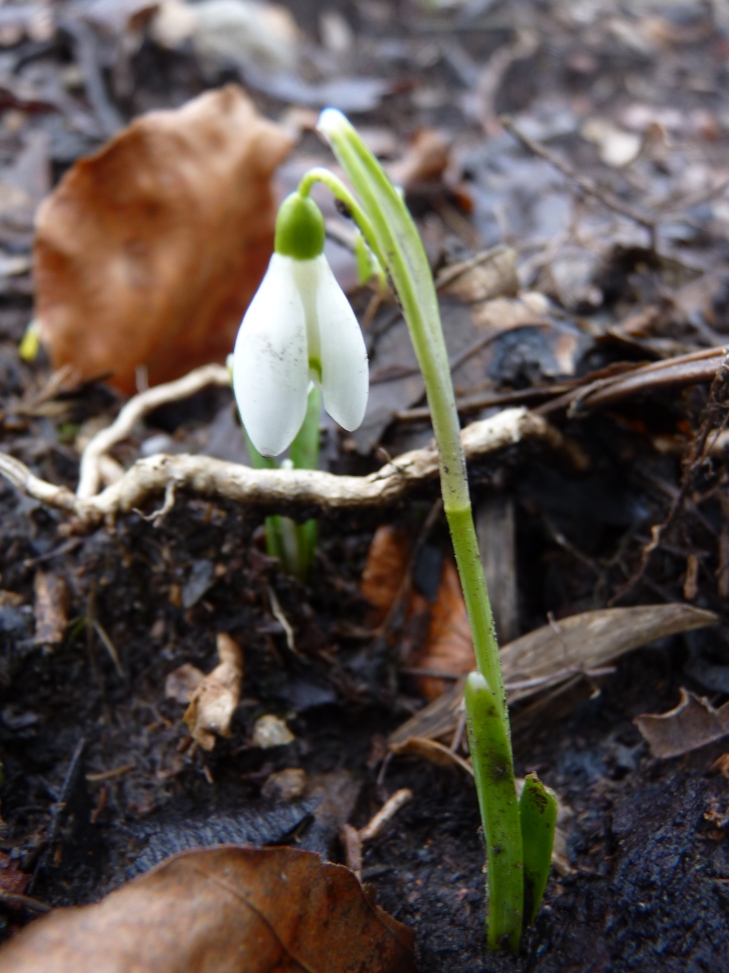 The snowdrops are growing!

The lake works contractors spent most of the last week pulling out from their site office by the new stone bridge and also moving earth and soil to partially landscape the hydro turbine site. In such wet conditions, it wasn’t possible to do as much as they had hoped so they will finish off later in the summer when they return to complete their contract. We are waiting on confirmation of the planned programme of work, currently being considered by Natural Resources Wales. 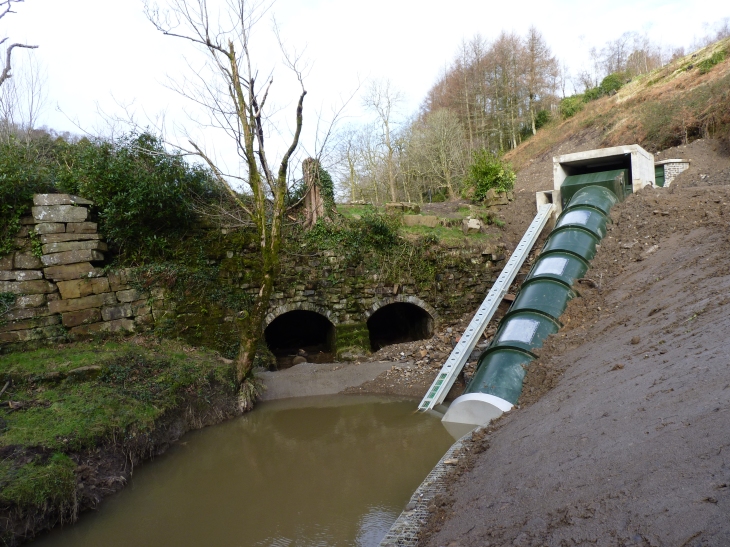 The electrical contractors connected up the hydro turbine this week. A section of the coffer dam was also removed to allow water from the lake to enter the turbine feed channel for the first time. It’s all a step closer to the time when the Archimedean screw starts to turn and generate electricity. 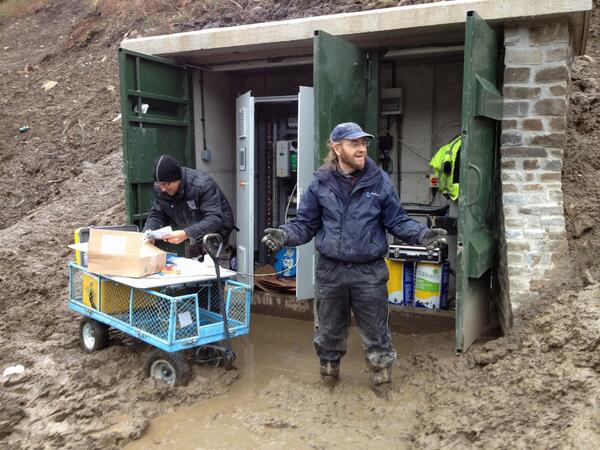 Volunteer, Brian Meredith, has spotted goosanders on upper lake in recent weeks. This is a clear indication that our efforts to create open water at upper lake will, in time, improve wildlife habitat. On a conservation of wildlife note, we have teamed up with the Wildlife Trust South West Wales to run a series of wildlife-related events in 2014 including otter surveys, bat nights and moth evenings. For a sneaky peak of what’s to come, visit http://www.welshwildlife.org 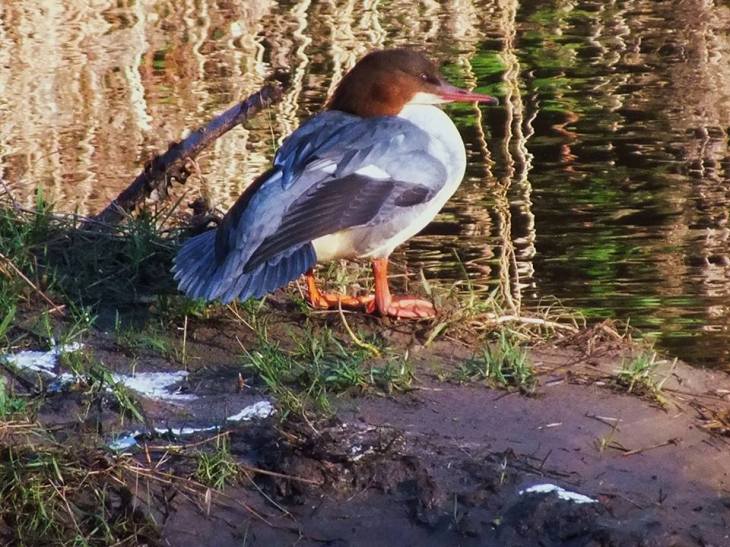 LLEWELYN BRIDGE
With our contractors off-site for the first time since October 2012, it’s great to have the Llewelyn bridge accessible on both sides, opening up a great number of possibilities for new circular walks. Don’t forget your wellies though, the paths are still rather muddy – especially with the amount of rain we’ve had in recent weeks. 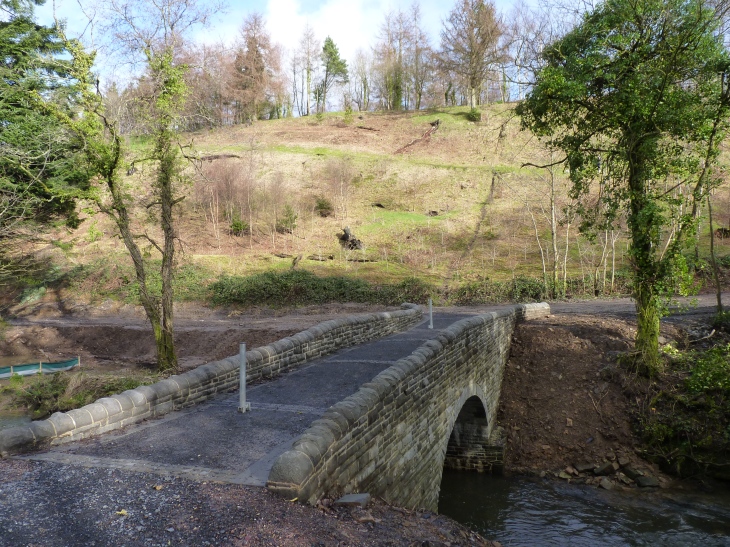 WOODLAND GARDENING
It has been a very muddy month for our woodland volunteers. They have worked extremely hard on the terrace area, clearing laurel from the slopes, grading the edges of the footpaths and digging stumps out of the top terrace wall so that it can be rebuilt. They have also been stone picking the terrace area and continuing to dig out the bramble ready for the area to be planted. 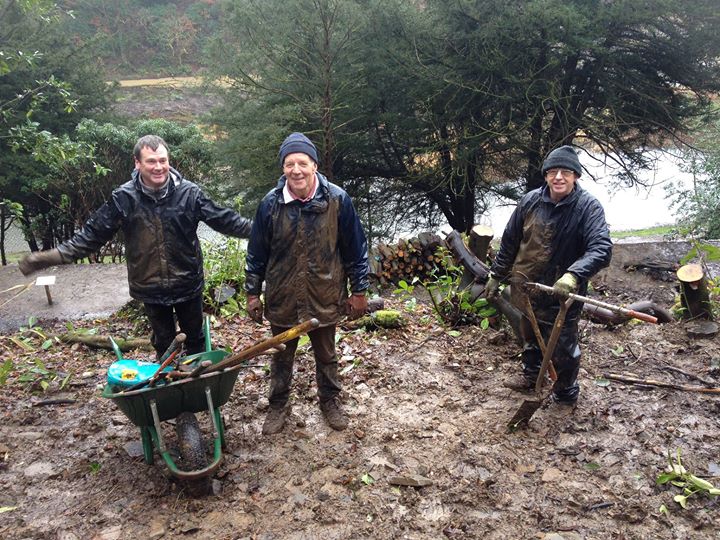 Why are we thinning the north west bank? As part of our woodland management scheme, we are trying to control and eradicate the invasive rhododendron ponticum (the wild type – not the specimen type) in order to give the woodland floor light and to give other species the chance to grow. There is a dormant seedbank of bluebells, anemones, dog’s mercury and more ready to reach for the sky – if only they can have the chance to grow! But, not only does the invasive rhododendron ponticum out-compete native flora, it also harbours the lethal disease Phytopthera Ramorum, that has killed off so many hybrid rhododendron, azaleas and many decorative trees and shrubs. It also infects larch trees which is a major concern UK-wide. 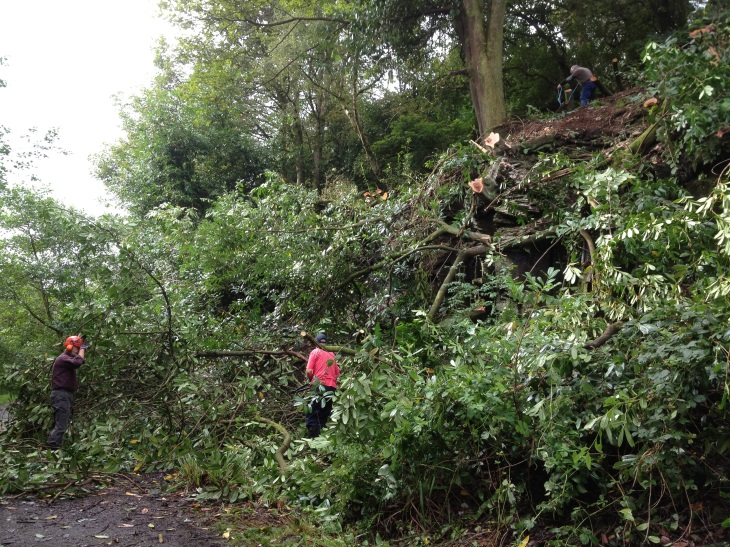 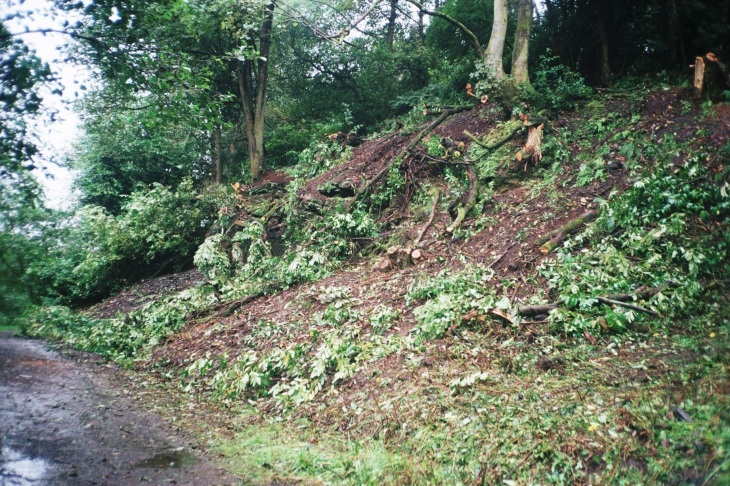 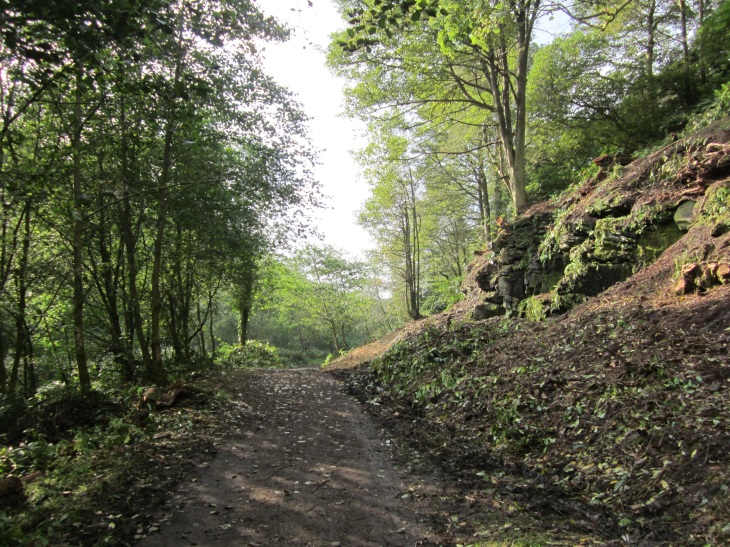 EQUATORIAL OBSERVATORY
Exciting news! A contractor has been selected to restore the Observatory and we now have permission to make a start. Here’s a sneaky peak of what it looks like inside!

Inside the Observatory. Photo by Jeremy Douglas-Jones (2013)

Did you know? This is one of the few remaining original structures on the estate. The foundation stone was laid in 1851 by Thereza Dillwyn Llewelyn assisted by her sisters Emma and Elinor. Father and daughter were enthusiastic astronomers and it was from here they made one of the first photographs of the moon (c.1857/8). The stone rotunda building was capped by a wooden, copper-clad drum that revolved on metal rollers pulled by a chained gearing system. Halfway across the diameter of the drum was a top shutter and another on the side through which the telescope could be pointed. The inside walls were lined with hollow clay bricks for the dual purpose of retaining heat and preventing vibrations. The telescope rested on a central pillar within a pit surrounded by an elevated wooden floor. The adjoining lower room was used as a laboratory and photographic darkroom.

We aim to restore this building of national importance for public benefit in 2014. 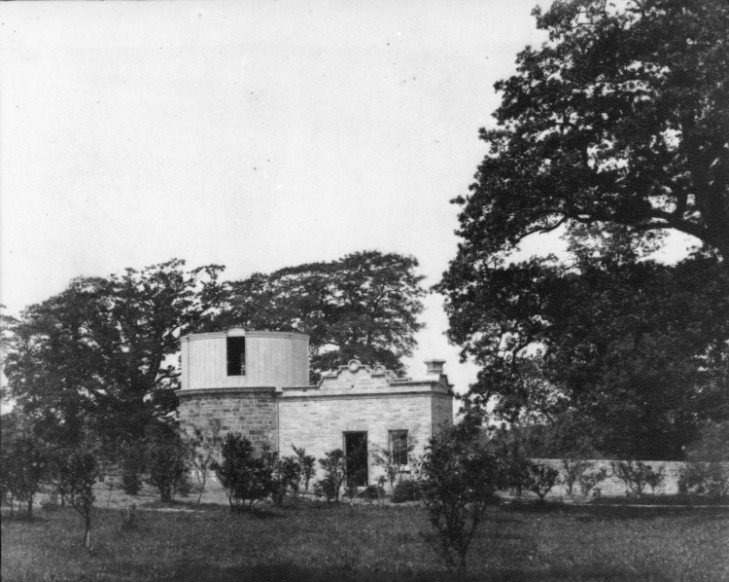 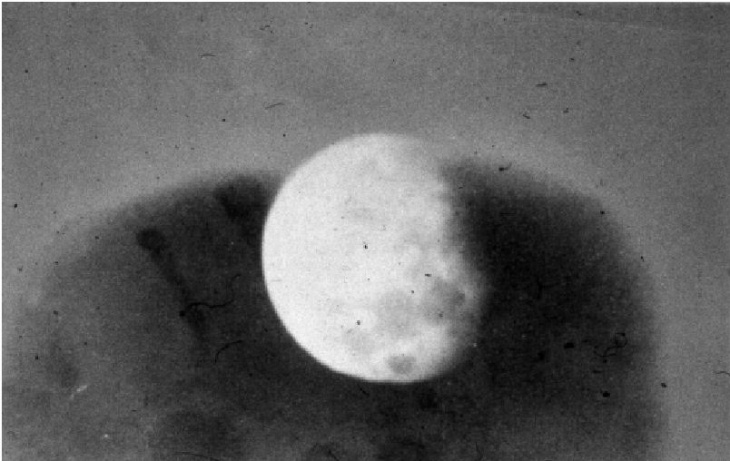 If you would like to find out more about John Dillwyn Llewelyn, the photographer of Penllergare, you may find this article published in the New York Times this week interesting: http://www.nytimes.com/2014/02/09/arts/design/daguerreotypes-spur-book-on-john-dillwyn-llewelyn.html?referrer=&_r=0

FUNDRAISING & EVENTS
We have been chosen as one of 50 community projects in Swansea as part of the South Wales Evening Post’s “Cash for Communities” competition. Every coupon collected (printed in daily editions of the South Wales Evening Post until Friday 14th March) will count towards winning a share of a £20,000 prize. The more coupons we collect, the bigger the prize! We would love to get as many people as possible collecting coupons on our behalf – please ask your friends, families and neighbours to support our cause. All coupons will need to be handed in at the coffee shop at Penllergare Valley Woods. 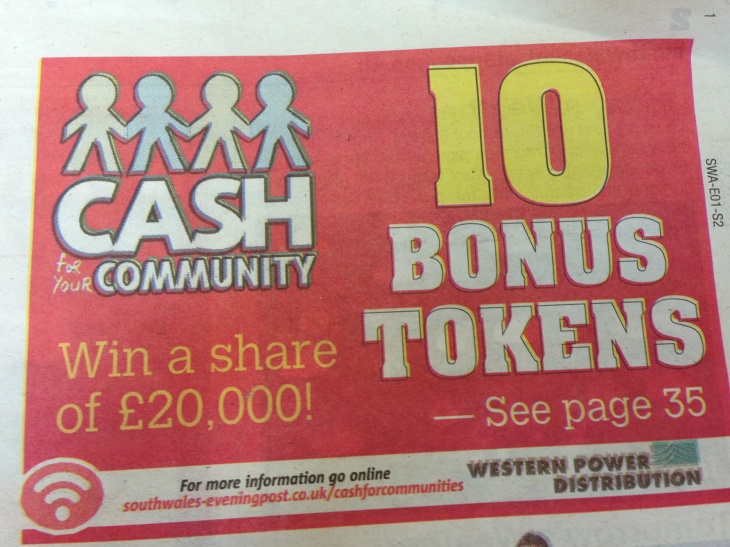 This month, we welcomed Suzy Davies, Welsh Conservative AM for South Wales West for a tour of Valley Woods. Ms Davies is the shadow spokesperson for Tourism and Heritage and enjoyed learning about the Dillwyn Llewelyn story and the work of the Penllergare Trust. She especially enjoyed meeting volunteers in the woods, on the terrace gardens and in the visitor centre. Thank you for taking time to visit us. 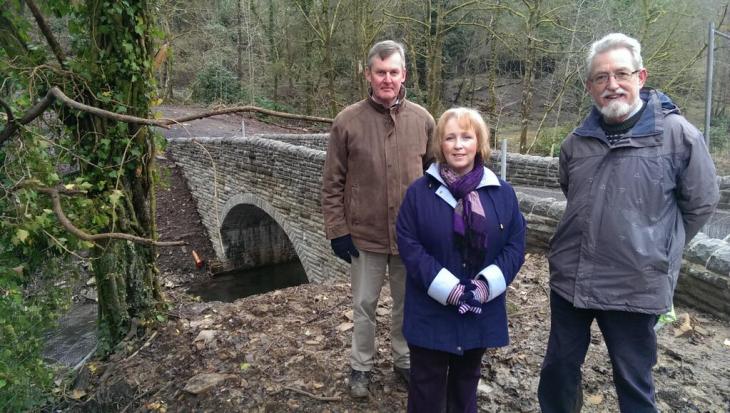 A date for your diary! The programme on Amy Dillwyn in the ‘Mamwlad’ series – partly filmed at Penllergare Valley Woods in 2013 – will be shown on S4C on Sunday 16th February at 8.30pm with a repeat on the following Saturday at 11.30am. It is also possible to view the programme and the whole series – Mamwlad presented by Ffion Hague on the S4C website – www.S4C.co.uk/clic/c_index.shtml Subtitles are available on all viewings.

Do feel free to pop in to chat with our volunteers, to have a cup of tea and/or to pick up a leaflet at any time.